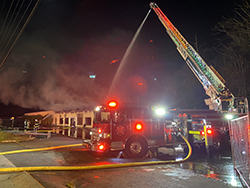 A passerby reported the fire in the 18100 block of Highway 99 just before 2 a.m. The north half of the warehouse was engulfed in flames when the first South County Fire crews arrived. Firefighters from the Everett Fire Department, Mukilteo Fire Department and Snohomish County Fire District 7 responded to assist. No one was injured.

Heavy fire involvement made it unsafe for firefighters to enter the warehouse. They set up an aerial ladder stream and attacked the fire from the outside. Crews had the fire under control within an hour, but firefighters remained on scene through the afternoon to extinguish hard-to-reach hot spots smoldering in debris at the north end of the building where a section of roof collapsed.

Investigation into the cause of the fire is ongoing. The warehouse had been boarded up and vacant for many years. Witnesses and arriving firefighters observed transients running from the burning building.