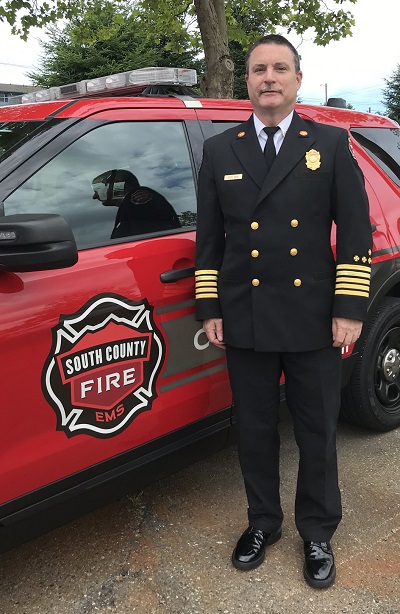 Dahl spent all but the early years of his fire service career in south Snohomish County. In 1986, after graduating from Mountlake Terrace High School, Dahl signed on as a firefighter at Pierce County Fire District 10. In 1989, he was hired by the Edmonds Fire Department. At both departments, he was honored as Firefighter of the Year and during his tenure in Edmonds, Dahl also earned the Chief’s Medal of Honor.

In Edmonds, Dahl moved up through the ranks to Battalion Chief, a position he retained when the department consolidated with Snohomish County Fire District 1 in 2010. Dahl was promoted to Deputy Chief of Operations in 2015. When Fire District 1 consolidated with the Lynnwood Fire Department to form South County Fire in 2017, Dahl was promoted to Assistant Chief of Operations. He took on the duties of Fire Chief for the regional fire authority last spring.

Dahl has served in leadership roles on many fire-related county boards and committees. He also served on interagency incident management teams deployed regionally and nationally to wildland fires and other major disasters including Hurricane Michael in Florida in 2018.

Last year, South County Fire presented Dahl with the Meritorious Service Award, honoring his exceptional professionalism throughout his career and dedication to the best interest of the residents and employees of the regional fire authority.

The South County Fire Board of Commissioners adopted a resolution earlier this month commending Dahl for “his distinguished years of dedicated service, leadership of South County Fire employees, and adhering to the highest of standards in meeting the public safety needs of the citizens of South Snohomish County.”

“We thank Chief Dahl for his years of service, and we wish him well in retirement,” said Commissioner Jim Kenny, chair of the South County Fire Board of Commissioners. 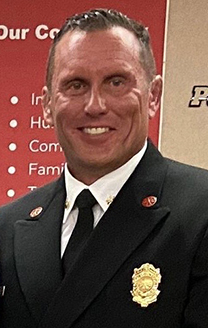 The Edmonds native is the third generation of his family to join the fire service. He has spent most of his life and his entire 24-year career within the borders of South County Fire. In 1996, Hovis was hired by the Mountlake Terrace Fire Department and moved up through the ranks as local fire departments consolidated over the years. He most recently served as Assistant Chief of Operations for South County Fire.

Hovis holds an associate degree in fire science from Bellevue College and a bachelor’s degree in emergency readiness and response management from the National Labor College in Maryland.

“We welcome Chief Hovis to the helm of South County Fire, and we look forward to his steady leadership,” Kenny said.

Hovis said, “I am very humbled by the Board of Commissioners’ confidence in my ability to lead as Interim Fire Chief while we continue efforts to find a permanent Fire Chief. I will continue to serve our organization, with the added passion that comes with having roots in the local community and the knowledge that our members provide outstanding service and care each day throughout the regional fire authority.”