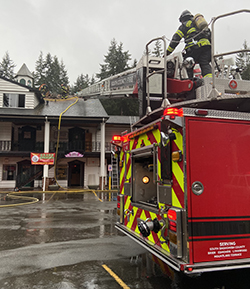 A two-alarm fire caused more than $400,000 damage to the Colonial Pantry Restaurant in Edmonds on March 13.

A customer called 911 at 7:50 a.m. to report a kitchen fire in the restaurant at Firdale Village, a two-story commercial building in the 9600 block of Firdale Way. Customers and employees safely exited the restaurant located on the top floor. One employee was exposed to smoke, and as a precaution, was transported by firefighters to a hospital.

With reports of black smoke and flames from the roof, South County Fire called for a second alarm. Shoreline Fire crews responded to assist. About 50 firefighters were on scene at the peak of the fire. They had the fire under control within about 30 minutes and kept the fire contained to the restaurant kitchen and attic. A tanning salon on the lower level of the building sustained water damage. All other businesses in the building were cleared to reopen by noon.