The South County Fire Board of Commissioners dedicated a plaque in memory of Commissioner Richard Schrock at the department’s headquarters this week.

Commissioner Schrock served as a fire commissioner in south Snohomish County for more than eight years. He passed away last May after a battle with cancer.

Current and former fire commissioners, public safety leaders and community members shared their memories of Commissioner Schrock at the plaque dedication on Tuesday. Many recalled his leadership in regionalization of fire and emergency services. Those who worked with Commissioner Schrock on the Snohomish County Emergency Radio System Board of Directors spoke of his commitment to public safety and the key role he played in replacing the county’s aging police and fire radio system. Commissioner Schrock was also remembered for his work as a founding board member of the Lake Stickney Conservancy that was instrumental in creating the Lake Stickney Community Park.

“Commissioner Schrock was very passionate, very hardworking and very well prepared. He was willing to champion the larger issues that make a difference over the long-term,” said Board Chair Jim Kenny. “He was looking for new ideas and brought a unique perspective to our board.”

South County Fire is the largest provider of fire and emergency medical services in Snohomish County, serving more than 250,000 residents in unincorporated communities and the cities of Brier, Edmonds, Lynnwood and Mountlake Terrace. 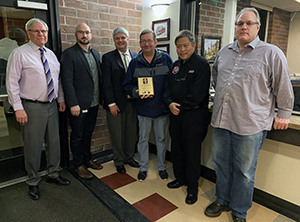