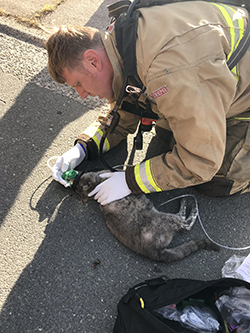 A woman was hospitalized and three cats died after fire broke out at a Lynnwood home this morning.

A passerby called 911 just before 7 a.m. to report the fire at the single-story home in the 20700 block of 60th Ave W. South County Fire crews approaching the scene could see a column of smoke from several blocks away.

The 66-year-old resident was outside the house when firefighters arrived. She was transported by medic unit to Swedish Edmonds Hospital. The woman had been exposed to heavy smoke as she exited her home. Her condition did not appear to be life-threatening.

Firefighters also treated a cat with oxygen and intravenous fluid. They took the cat to an emergency veterinary clinic in Lynnwood. The clinic staff reports the cat appears to be improving.

More than 25 firefighters responded and had the fire under control within 30 minutes. No injuries were reported.

South County Fire is continuing to investigate how the fire started, but it appears to be accidental. The house is uninhabitable with heavy damage throughout the structure. The resident does not have insurance. Red Cross has been contacted to provide assistance.